Data visualization is becoming a popular item all over the internet. Major media outlets like Mashable and Huffington Post don't seem to go a day without posting the newest infographic. What's interesting is that half the world praises these graphics while the other half brands them chartjunk. The amount of available data and amount of designers seem to be plentiful, but the combination of the two is proving to be volatile.

Being a team that creates data visualization tools, we're well read on dataviz best practices, and are also in tune with the demand for exciting and intriguing visuals. We've stayed on the sidelines of the debate, but we decided it's time to offer our 2 cents.

There's a battle going on between data visualization professionals like Stephen Few and Edward Tufte (the Jakob Nielsen of Infographics), and design professionals. One side is calling for minimization of chartjunk and the end of the over-designed infographic, while the other is pushing the boundaries of how much design can be applied to data before the data becomes an afterthought. With the flood of publicly available datasets over the past few years, it seems that the debate is just getting started.

We aren't going to try to convert our readers to follow the gospel of Tufte, because many of our customers have great uses for colorful and image-infused graphs. Having said that; Now you see it, The Visual Display of Quantitative Information and Show Me the Numbers are within our reach at all times, and get referenced often.

Our view is, a black and white line chart with no labels won't reach a fraction of the audience that some of today's poorest visualizations do, whereas an infographic filled to the brim with 3D pies, images, large text and loosely related graphics may reach tens of thousands of viewers without delivering any consumable, meaningful or accurate data.

We'd argue that the amount of non-data-ink or chartjunk used is irrelevant to data comprehension as long as the ink (err.. pixels) is used appropriately.

Here's some context for "appropriate:"

There is one fire we're willing to start and pour some fuel on. With the interactive capabilities of Flash and HTML5 we can now hover, click, alter, zoom, drill-down, and manipulate data visualizations in real-time. We can use rules to set the color or style of plots based on their value. Some of these features may fall within the current definition of "chartjunk" but we'd offer that the current definition was built for the printed chart and doesn't take into account new technology. We propose new nomenclature for visual elements in charts that are not necessary for data comprehension, but that do increase the engagement, interaction and viral reach of a visualization. We're going with chartbling for now.

We DON'T advocate stuffing a chart with graphics and images for the sole purpose of making it colorful and visually stimulating -- that is and will always be chartjunk...

If you think pie charts are poor by themselves, try comparing the results of these two related pies without hurting your brain. #chartjunk.[/caption] 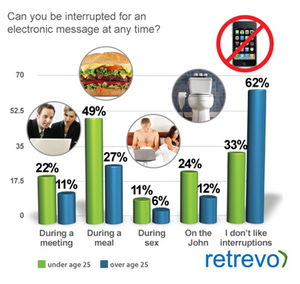 The stock images used here are barely tied to the story, and are too much of a distraction to provide any comprehension/retention benefit. #chartjunk[/caption]We DO commend those who bridge the gap between Tufte and Art by creating intriguing visualizations that readers want to study, understand and share with others. These are the individuals who will uncover important data, brush it off and deliver it to the masses. 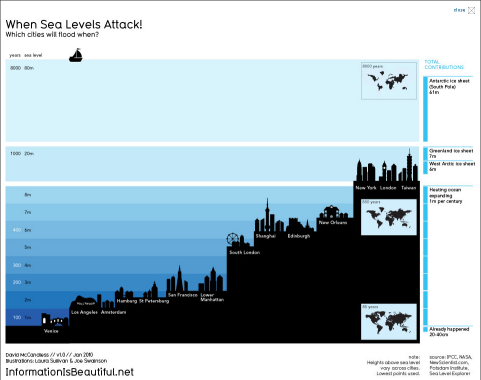 This infographic by David McCandless of http://infobeautiful.net adds interesting colors and graphics to a basic bar chart to help tell the story of rising sea levels. #chartbling[/caption]